MOSES LAKE — There is a little something missing from the middle of the intersection of W. Third Avenue and Ash Avenue in downtown Moses Lake.

On Tuesday, March 15, a upkeep crew with the city of Moses Lake took down the clock in the center of the intersection and moved it so it could be taken aside, repaired and repainted.

City officials to start with pointed out the clock had stopped doing work in early January, in accordance to metropolis spokesperson Lynne Lynch.

“It was not working for quite a few months,” stated Parks Upkeep Superintendent Invoice Aukett. “It took time to put together. We necessary to wait for elements from the maker and the right paint.”

Aukett stated the clock, which was first mounted in Sinkiuse Square someday in the 1990s but later moved to middle of the intersection when Third Avenue was rebuilt, has been hauled to a town servicing centre wherever city crews will repaint it and clockmaker George Pease of Poulsbo will fix and rebuild the clock’s inside workings.

“We chose to get it aside,” Aukett reported. “It was time to repaint the total clock assembly, and we required to do that in a managed environment.”

In accordance to Lynch, the clock’s motor and equipment box have worn out, and as a portion of the mend do the job, LED lights will substitute the present-day fluorescent lights illuminating the clock facial area.

Aukett said the repairs are predicted to be finished by mid-April, with the hope that the clock will be returned to its rightful area smack in the middle of the roundabout by Easter.

The function is slated to value the town all around $7,000, Aukett added.

James Shank, a financial advisor with Edward Jones whose workplace at the corner of Third and Ash gives him a continuous watch of the clock, mentioned he misses it.

“I know a great deal of folks in city don’t like the clock, but I appreciate it. It’s a great landmark,” Shank stated. “Everybody is aware the place it is.”

Charles H. Featherstone can be arrived at at [email protected] 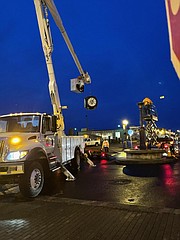 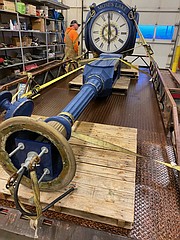