On 7 May 1992, Space Shuttle Endeavour lifted off on her first voyage at 23:40 UTC from Pad-B at the Kennedy Space Center in Florida. Her target: Intelsat VI F-3 (now known as Intelsat 603). The goal: rendezvous with, repair, and re-release the satellite.

In the now-30 years since that mission, on-orbit satellite repair and servicing have largely languished — save for the five Hubble servicing missions Endeavour and the Shuttle fleet would conduct after STS-49.

Endeavour’s first mission and a look to the future

One of the selling points of the Space Shuttle system was its ability to not just allow large payloads and satellites to be launched at one time, but that the vehicle was capable of finally enabling on-orbit rescue, repair, and servicing of satellites.

This was, in reality, only accomplished a few times in the Shuttle program’s history. But on 7 May 1992, Endeavour stood ready for the STS-49 voyage to do just that.

Setting the stage for the flight, Intelsat VI F-3 was launched on a Titan III rocket on 14 March 1990 and stranded in low Earth orbit when the rocket’s Orbus-21S upper stage failed to separate from Titan III’s second stage.

Intelsat, not wanting to throw away a perfectly good satellite that just needed a new Orbus-21S perigee kick stage to get it into its intended geostationary transfer orbit, went to NASA and purchased a Shuttle rescue mission.

Endeavour launched two years and two months after Intelsat VI F-3, rendezvousing with the craft three times due to failures to capture the satellite using the intended two-person spacewalk to attach a capture bar to it.

On the third rendezvous attempt, the first and to-date only three-person spacewalk took place, allowing for the successful capture of Intelsat VI F-3 as the mission’s commander delicately flew Endeavour in station-keeping with the satellite.

The crew then attached the new perigee kick motor and re-released the satellite into orbit where the motor successfully fired.

The satellite then used its thrusters to fully raise itself to geostationary orbit (GEO) on 21 May 1992 — just over a week after it was rescued in low Earth orbit. It operated in GEO until January 2013, with Intelsat confirming its retirement and placement in a GEO graveyard orbit in February 2015.

Working the STS-49 mission for Intelsat was a newly hired engineer, Joe Anderson — now the Vice President of SpaceLogistics, a Northrop Grumman company — and one of the people deeply involved in making on-orbit serving, rescue, and repair of satellites commonplace.

“Booster ignition and lift-off of the maiden voyage of Endeavour on satellite rescue mission”.

30 years ago today, a new Orbiter, OV-105 took to the skies for the very first time on mission STS-49. pic.twitter.com/6tUKhPJXbS

“I was a young engineer at the time [of STS-49],” related Anderson in an interview with NASASpaceflight. “I had joined Intelsat just a few weeks before the launch of Endeavour, and I walked right into the operations center and was part of the mission team for Intelsat managing the operations of the 603 satellite as it was being rescued.”

Specifically, Anderson was the attitude control engineer for the rescue, making sure the satellite was spun down properly so the astronauts could grab it and attach the capture bar. He also made sure the satellite’s orientation was stable and that all of its thrusters were disabled as Endeavour approached and conducted station-keeping operations.

Following the mission, Anderson’s career never really took him away from the idea of satellite servicing — even if his day-to-day operations changed.

“After that, I was a spacecraft engineer. I assisted in the design, operation, and then eventually the decommissioning of dozens of satellites. And I use the term ‘grave digger’ here because I’ve been tasked with driving these otherwise healthy satellites to their demise out in a graveyard orbit just because they ran out of fuel. But the satellite was still working fine,” Anderson related.

“It just felt like there had to be a better way of doing that.”

Ten years ago, Anderson became aware of a program at Northrop Grumman for Mission Extension Vehicles (MEVs) which, as the name implies, are designed to extend the life of a satellite in orbit. “I liked it so much I decided to join them to help make it a reality,” said Anderson. 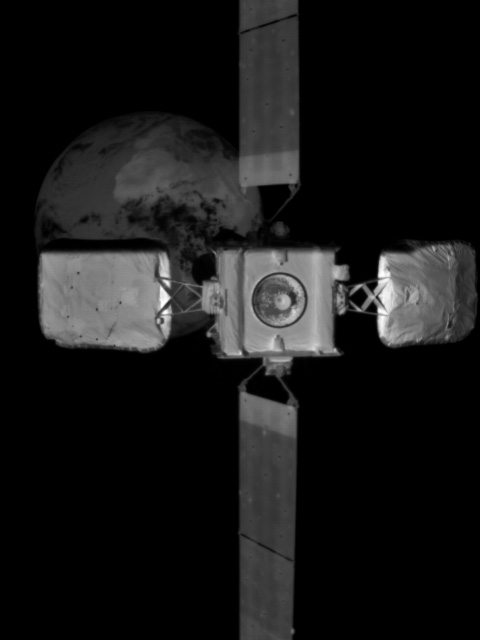 Intelsat 10-02 seen from MEV-2 during the final part of the latter’s approach for docking to the active satellite in geostationary orbit in April 2021. (Credit: Northrop Grumman)

But there were many hurdles to overcome.

“As the leading innovator here to bring this commercial service to market, we had to perfect the technical concept around the docking. That was a big thing to do. But we also had to build and finance our business model to make it a true commercial service.”

“It was also hard to establish a regulatory regime to license this new space capability because it wasn’t something that could be licensed when we started. We had to invent new forms of insurance to cover losses for these sorts of things. And then we had to identify our customers that had the vision and the technical skills to help us safely bring this new capability to market,” noted Anderson.

Come forward several years in the Mission Extension Vehicles development process, and the first in-space customer for the crafts ended up being Anderson’s previous employer: Intelsat.

Presently, the first two MEVs are attached to Intelsats 901 and 10-02, respectively. These satellites were running out of fuel but were otherwise still fully operational.

However, despite the success of the Mission Extension Vehicles program, there’s a catch. The MEVs can only help one satellite at a time, and they can only extend a satellite’s life by using the Mission Extension Vehicle’s fuel; they can’t service or repair satellites. And with five-year life-extension service contracts for the MEVs, the need for more immediate, quick, and rapid servicing became a priority.

“What we wanted to do was find a solution where we could extend many satellites, and at a much, much better price point for our customers,” added Anderson. “And so in looking at that, trying to figure out ‘How do we do that?’, we looked at refueling these satellites that were not prepared [for that] when [they were] launched 10 years ago.”

“We came to the conclusion that that was probably a risk that was just too great for customers to accept: to try to refuel satellites that were not designed [for that]. So we found another solution which was essentially to put on just a small propulsion augmentation device that we now call a Mission Extension Pod.”

While not all satellites are built the same in terms of their platform (bus) and overall design, about 80% of satellites in geostationary orbit share two common features that the MEVs, Mission Robotic Vehicles, and Mission Extension Pods can use as attachment points: a liquid apogee engine and a launch adaptor ring.

But even with this capability, are customers showing up for the service? Are they seeing the benefit of servicing satellites on-orbit instead of building newer, more advanced ones to replace them?

According to Anderson, the answer is yes. “The reaction from the industry has been very good. We’ve been getting regular calls from operators asking for the service capability. A lot of those calls are looking for something in the next year or two.” 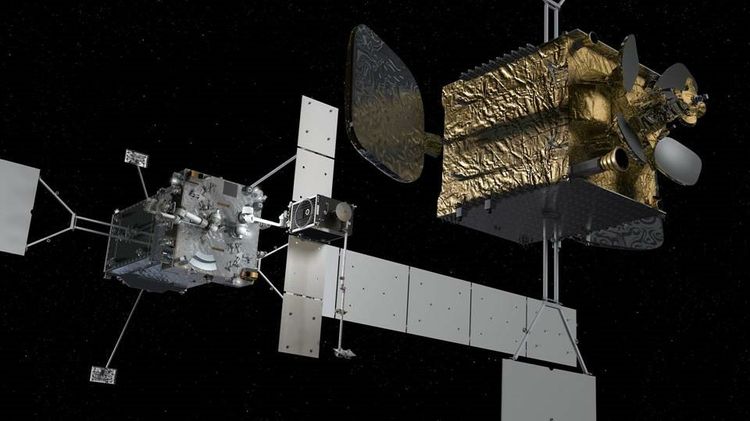 “And so, right now, that’s indicating that this was a kind of ‘build it and they will come’ market.”

For the Mission Robotic Vehicles and Mission Extension Pods, the first signed contract for their use is with Optus, with a launch slated for 2024. Additionally, five other signed term sheets (with active work progressing toward signed contracts) with other potential customers for the installation of Mission Extension Pods onto satellites in geostationary orbit out through 2026 are in work.

Once installation is complete, the Mission Robotic Vehicle will then move on to its next target satellite where it will repeat the process.

Meanwhile, additional Mission Extension Pods will be launched and begin the process of raising their orbits to their respective targets — effectively enabling the MRV to keep moving from satellite to satellite in the geostationary belt.

However, the robotic arm itself provides more than just a “grapple-tug” service for the Mission Extention Pods.

“It could actually be used to do other types of services as well,” noted Anderson. “Every couple of years, there are satellites that the solar array doesn’t deploy properly, or antennas don’t deploy properly. And these robotic arms could be used to service those types of anomalies and perhaps restore them to full service.”

“We started looking at our own arm, developing that or procuring a robotic arm. But ultimately, we had a good opportunity to partner with DARPA, who’ve been developing very sophisticated space robotics for decades now,” said Anderson.

“And the opportunity came to us that they had a couple of robotic arms that they’d been developing that were near flight-ready. And we were able to put together a partnership with them to fly their robotics on our commercial vehicle.”

But… why so long from STS-49 to now in terms of on-orbit repair being a more permanent element of our use of space assets? 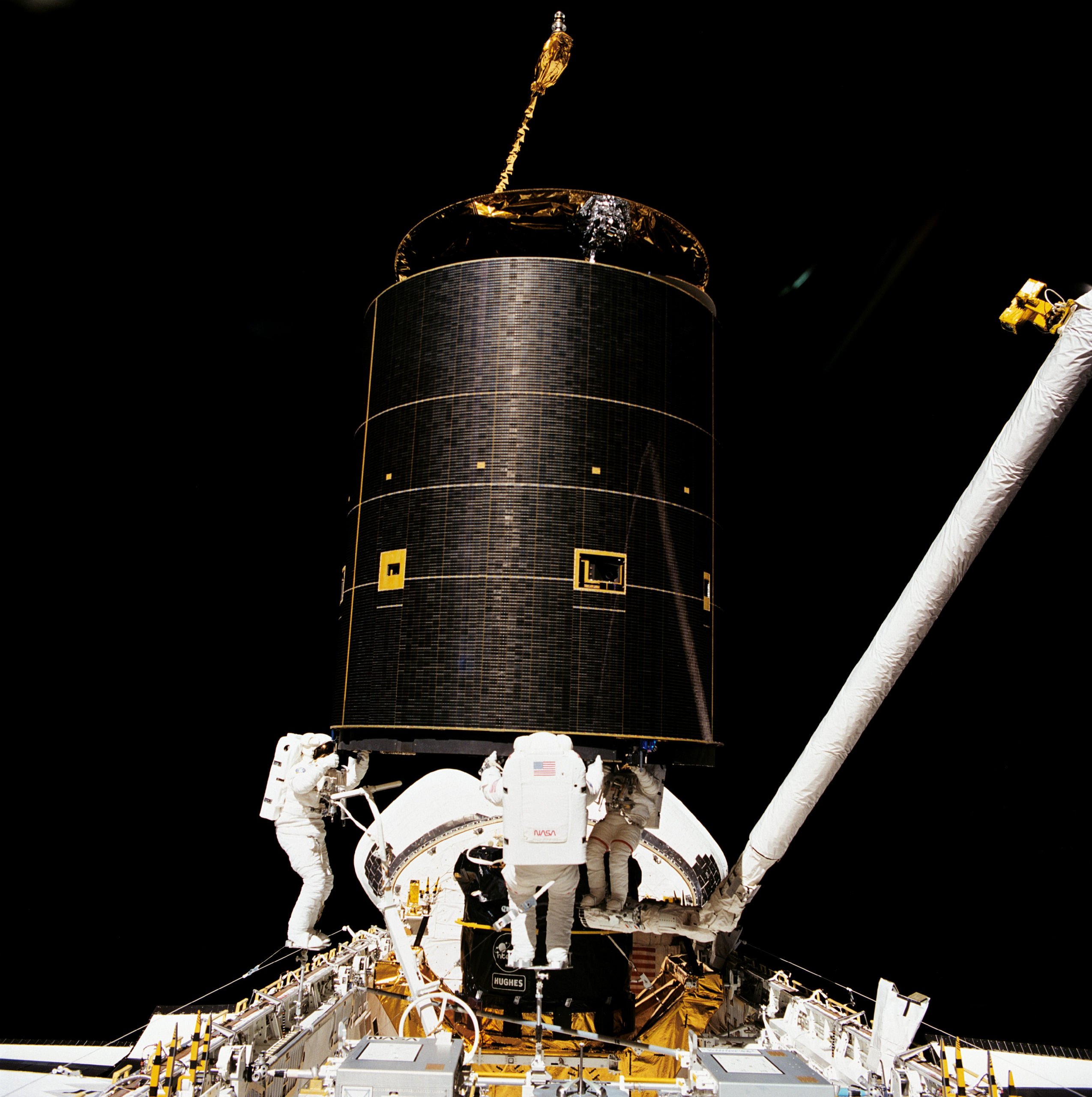 During the to-date only three-person spacewalk, Hieb, Akers, and Thuot work to capture Intelsat VI F-3 in May 1992. (Credit: NASA)

“A very short answer is because it’s hard,” answered Anderson. “People have talked about this for decades, and they’ve tried to create businesses to do this type of work. I think what we did a little bit different is we took a relatively ‘keep it simple’ approach because it is hard.”

“And that ‘keep it simple’ approach was to simply dock to these two features, [the liquid apogee engine or the launch adaptor ring]. Prior attempts were all looking at trying to refuel the satellites in orbit that were not designed to be refueled. And that’s really the long pole. That’s a big increment in technology and risk.”

“And so I think this approach that we selected to sort of take incremental steps where the customers can tolerate the risk level and we could develop a real business case is what worked.”